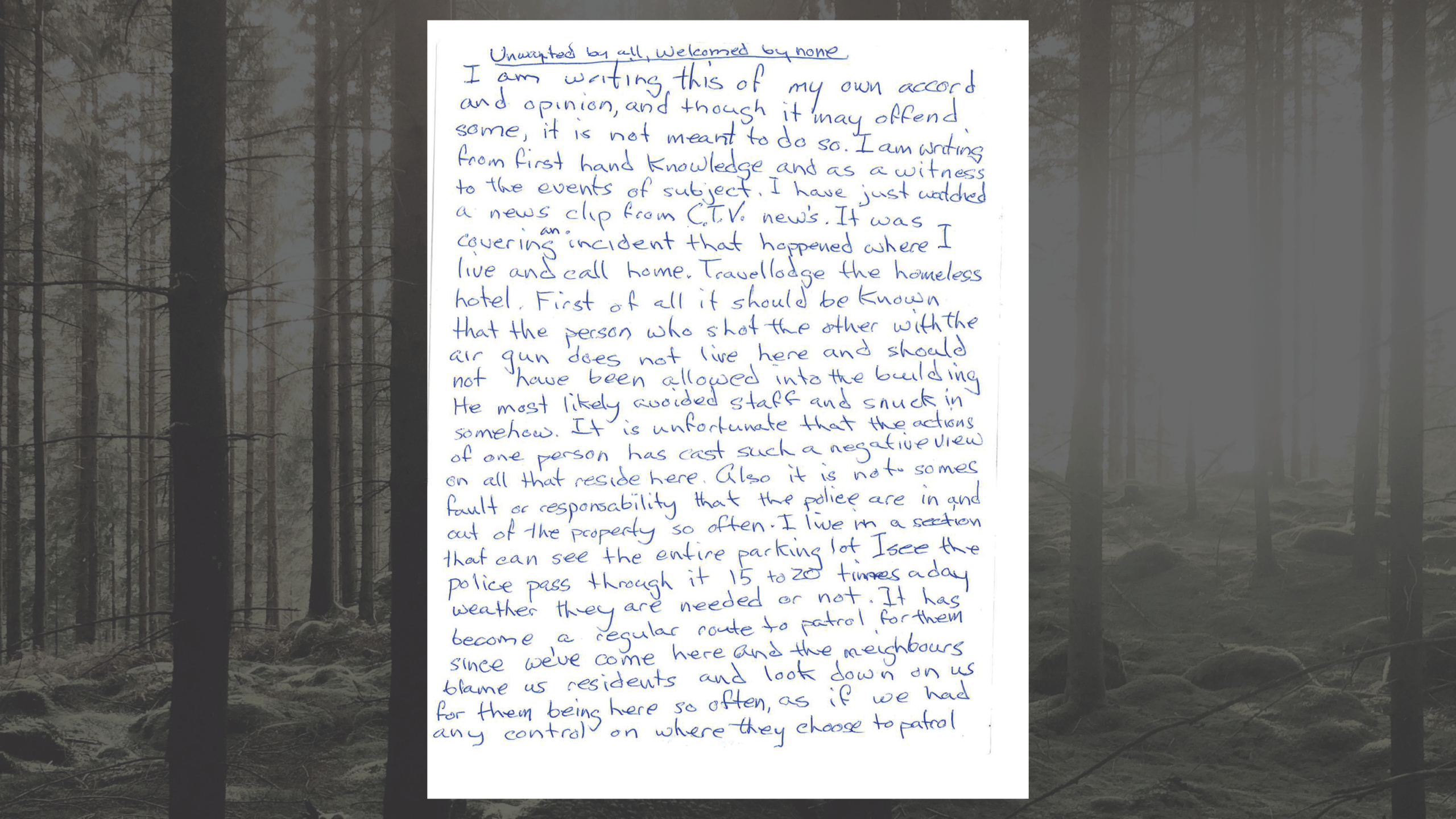 A letter from Andre a resident of Travelodge.

Unwanted by All, Welcome by None

I am writing this of my own accord and opinion and though it may offend some, it is not meant to do so. I am writing from firsthand knowledge and as a witness to the events of subject. I have just watched a news clip from CTV News. It was covering an incident that happened where I live and call home. Travelodge the homeless hotel.

First of all, it should be known that the person who shot the other with the air gun does not live here and should not have been allowed into the building. He most likely avoided staff and snuck in somehow. It is unfortunate that the actions of one person has cast such a negative view on all that reside here. Also, it is not someone’s fault or responsibility that the police are in and out of the property so often. I live in a section that can see the entire parking lot. I see the police pass through it 15 to 20 times a day whether they are needed or not.  It has become a regular route to patrol for them since we’ve come here and the neighbors blame us residents and look down on us for them being here so often, as if we had any control on where they choose to patrol.

I became homeless in Victoria after I moved back here from Alberta. Because of my low income and lack of local references I was unable to find an apartment for my partner and I. We spent the winter in a church and at the shelter called Our Place. A lot of the time I felt threatened and uncomfortable by the people that go there. I got into at least 5 fights protecting my friend and I and trying to protect what little possessions we had after being robbed of our luggage in Vancouver while waiting for the ferry bus to come onto the Island.

My work tools, medication, clothing, and cash as well as her jewelry, personal family stuff, and all we had including medical documents and I.D.. When we arrived here we had nothing. My older brother lives here and he helped a little but as he is retired and living on a fixed pension and budget we could not and would not impose any further on his kindness and generosity. We have since broken contact because of our dilemma.

During our stay at the shelter, I tried working but because of my disabilities and our living conditions, I could not maintain employment. While we were there we were both assaulted and we were being stolen from constantly. We were forced to live with and keep as little as possible. Not being able to steal kept away the thieves and being an aggressive asshole kept away the assholes.

I truly am a kind person with a big heart and love all people regardless of age, colour, or income. Still, during our time there we met some super nice people. The staff and others that were stuck like us were full of positive influence and hope.

When COVID-19 hit, out of fear for our health and because mean people were getting meaner. I took all I had borrowed some from my bro to get shelter and separation from the sickness. 1600 a month was way more than we could afford but I got a hotel room for us to stay safe in. All our income was used up as well as a couple of small loans from my bro. We were destined to eventually be homeless again. Now, Our Place was closed as well as the night shelters.

Every day we would get up and search for a place to rent and call wanted ads and property managers. With no exaggerations, 3 people out of over 100 calls responded. As soon as I gave up any and I mean any information I could feel rejection from them. Comments like, “full-time”, “personal references”, “local” and “waiting list,” broke my confidence of finding a suitable clean rental. I was crushed.

So when BC Housing took over this hotel and we were asked to leave panic set in. My prayers were answered when I met the lady named Caroline. She was a very kind and understanding lady. She said that she would not allow us to be put back out on the street and in danger of getting sick. We were so grateful and very relieved. Still, we have almost 0 chance of finding a normal home under the circumstances of our health, the economy, and the renters market.

So here we are. There are a lot of people here that I don’t know and some I don’t want to get to know. Some are ungrateful, destructive, and truly don’t give a crap about anyone or anything. I face them every day with courage and hope that they may find it in themselves to appreciate their blessings and learn that vandalism and disregard is for chumps. But also there are 3 other couples and a whole bunch of others that are super nice and just trapped like us.

We appreciate our safety and the people that reach out and go the extra mile for those who have less and are stuck. I have been throughout Canada and though I haven’t needed places like this I have never seen such a cool, loving, and kind bunch of people. Anyhow, what I am really trying to say is that sure, there are some that don’t care but for every one of them there is one like me, and if I ever see some person being harassed or bothered I will be there to say leave them alone. Or if I see garbage just thrown to the ground I pick it up and so will others.

Bad people are everywhere and the only way to come on top is to be good people. Maybe then those who don’t care may see our example and find cause to care themselves. I try as often as I can to help others and to be there for those in need just as others have done for me. So please don’t let the dark cast over the light by blaming the innocent for the actions of the guilty.

Thanks for listening to my views and god bless.

P.S. My heartfelt thanks to BC Housing and the Greater Victoria Coalition to End Homelessness, all who donate and make this place possible, and the staff and volunteers. Without it, the ones I love and these local friends may have fallen to COVID-19 but they are safe.